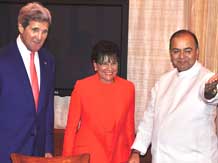 The recently concluded India-US Strategic Dialogue set the tone for improved strategic and economic ties at a pivotal point in bilateral partnership, representatives of American corporate sector and experts have said.

“It is heartening to see that despite divergent views on certain issues, there is a sincere commitment towards the renewed bilateral strategic partnership,” said Diane Farrell, acting president of the US India Business Council (USIBC).

“Industry is pleased by the positive momentum provided by these talks in the lead up to Prime Minister (Narendra) Modi’s visit to the US in September,” she said in a statement on the successful conclusion of the fifth annual India-US Strategic Dialogue, for which Secretary of State John Kerry travelled to India.

USIBC has proposed to work closely with both governments on initiatives including development of a US-led consortium towards building smart cities in India.

Farrell commended both governments on their tireless commitment to the dialogue process.

“Strengthening strategic and economic ties enables a better business environment, creating jobs and growth for both countries,” she said.

Frank Islam, who serves on a number of boards and advisory councils including the Kennedy Center Board of Trustees, the US Institute of Peace, the Woodrow Wilson Center, and the Brookings Institution, said the Strategic Dialogue laid ground work for the US visit of Prime Minister Modi in September.

“Not surprisingly, Secretary Kerry urged India to remove trade barriers. Obviously, the US was upset with India for blocking the WTO reform in Geneva over food subsidy,” he said.

“Even though the US-India relations have been on a bumpy road, they have not received a whole lot of mind share here because of the US preoccupation with other global issues and the prevailing notion that the UPA government was on its way out,” Islam said.