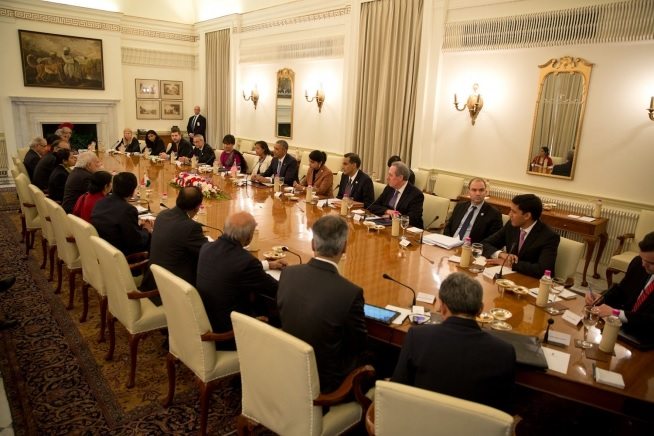 Although the primary purpose of the President’s visit was to attend the Republic Day parade, business was very high on his agenda for this trip.   This is attested to by the fact that just hours before Obama became the first American president to be the chief guest at the parade, he addressed a roundtable of Indian and U.S. CEO’s at a U.S. CEO Summit.

In that meeting, he said, “[Even] as this visit is rich with symbolism, it’s also a visit of great substance.”  He went on to assert, “We’re advancing the vision that I laid out on my last visit — India and the United States as true global partners. And a core element of this vision is greater trade, investment and economic partnership.”

I was privileged to be one of the executive participants in that roundtable at the invitation of the White House.  The roundtable included among others, Obama, Modi, senior officials from the two countries and prominent CEOs from India and the United States.

The roundtable came up with more than a dozen key recommendations in areas such as infrastructure, trade, defense and intellectual property rights to strengthen the “Strategic Partnership” between the United States and India.  These will be pursued through an onoing Strategic and Commercial Dialogue.

Staying true to his words, the President announced initiatives that are expected to generate more than $4 billion in trade and investment during this visit.

Perhaps the biggest headline from the presidential visit on the business front was an agreement between Modi and Obama to form an insurance plan that would finally encourage US companies to sell nuclear power plants to India.

Even after the two countries signed a historic civil nuclear treaty in 2008, US companies were reluctant to enter the Indian nuclear energy market because of the country’s strict liability law. The new deal is expected to change that.

Both President Obama and Prime Minister Modi should be commended for boldly tackling an issue that had become an irritant in relations. In fact, resolving civil nuclear liability issue was one of the key recommendations of the CEO roundtable.

Being a business person, I have always believed that economic ties should be at the front and center of India-US ties. Sitting around the table with these Indian and American CEOs I felt even more strongly about the enormous potential that can be achieved by increasing bilateral trade and business relations between these two great nations.

In closing, I would be remiss if I did not end this on a personal note.  Since leaving its shores for the United States as student in the early 1970s, I have returned to India on a number of occasions.

But this trip, accompanying the president of my adopted nation to the country of my birth, was an opportunity of a lifetime. My personal highlights included sitting on the reviewing stage on Rajapath for the Republic Day parade; taking part in the India-US CEO roundtable; and attending the state dinner hosted by Mukherjee at the Rashtrapati Bhavan for the US president.

The trip provided me an opportunity to see firsthand how India-US relations is evolving into a partnership that has regional and global dimensions, covering a broad spectrum of areas, including energy, global and regional security, terrorism, defense and climate change.

Many years ago, U.S. Secretary of State, Dean Acheson wrote a book titled, Present At The Creation, which reviewed the storied years of his career in the State Department.  For this brief moment in time, I too was “present at the creation” of a new business-focused agenda between India and the U.S.  It was a blessing and humbling experience for me – even more rewarding will be watching the results and benefits that will come to the citizens of both countries from this economic alliance between India and the United State.