It will support new management complex at Aligarh, endowed chair. 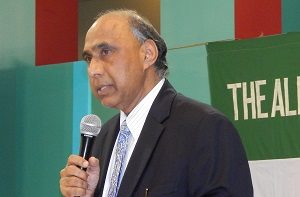 WASHINGTON, DC: The Washington area-based Frank Islam and Debbie Driesman Foundation has donated $222,000 to Aligarh Muslim University in India, as part of its $2 million commitment for the construction of a new management complex at the 140-year-old institution.

The $2 million donation was first announced in January by its founder and prominent Indian American entrepreneur and philanthropist Frank Islam, an alumnus of AMU, during a visit to the university.

A news release posted on the AMU website said the university has already earmarked three acres of land for the Frank Islam and Debbie Driesman Department of Management and Faculty of Management Studies and Research, which is estimated to cost $3 million.

The project will also include the “establishment of an endowed chair for entrepreneurship, innovation, corporate responsibility and business,” according to the university.

The Foundation will give the money in nine installments, Islam told the American Bazaar.

He said the management school will be focused on innovation, entrepreneurship and ethical business leadership. “As importantly, I am endowing a chair that will concentrate on these same areas,” he said. “In addition, this chair will focus on international collaboration, including faculty and students exchange program with some universities and business schools in North America and other international universities.”

The foundation stone for the new building will be laid later this fall, and he and Dreisman will be present on the occasion, the entrepreneur said. Islam is also scheduled to deliver keynote address on the AMU Convocation Day around the same time.

Asked what motivated him to give, the Azamgarh, Uttar Pradesh,-born Islam said his “days at AMU had a profound effect on me” and “Aligarh education was bridge to my future.”

He added: “I would not be the person I am if it were not for AMU education. My giving back to AMU is a way of beginning to repay the university for what it helped me to become. I owe a sense of gratitude to AMU.”

Islam serves on number boards and advisory councils including the Kennedy Center Board of Trustees, the U.S. Institute of Peace, the Woodrow Wilson Center, and the Brookings Institution, and sits on various boards and councils at more than half-dozen universities including Johns Hopkins, University, American University, and George Mason University.